Eighteen-year-old Dania Hassan made the country proud on May 2 when the US Department of State honoured her in recognition of her efforts to promote positive social change in the Pakistani education sector. She was awarded the Emerging Young Leaders Award for 2018 along with nine other outstanding youngsters from around the world.

Dania had displayed her flair for leadership by setting up an organisation called “Fun to Learn”, which conducted extracurricular programmes in underprivileged schools of Pakistan. As part of this initiative, she established teams of volunteers that provided students from lower income backgrounds exposure to a variety of activities, which they normally didn’t have access to. 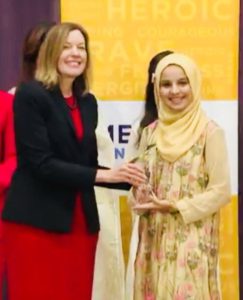 Before establishing her organisation, the teenager had been attending summer school at Johns Hopkins University through the US Summer Sisters Exchange Programme, which is an initiative of the US-Pakistan Women Council. She is also the youngest high-achiever of the Pakistan-US Alumni Network’s “30under30 series”.

Dania’s stupendous achievement of winning the Emerging Young Leaders Award has received recognition from the highest echelons, with Pakistan’s Ambassador to the US, Aizaz Chaudhry, mincing no words in his praise for both Dania Hassan and the US-Pakistan Women Council, whose efforts, he said, have been instrumental in promoting women empowerment and entrepreneurship in the country.

Speaking about Dania’s endeavour, Ambassador Chaudhry said that the 18-year-old is an example of how Pakistani youth and Pakistani women in particular are vibrant, energetic and passionate, and are surmounting great odds to excel in their respective fields. He also hoped that the council and its various partners would work towards identifying further opportunities to enhance future cooperation between the US and Pakistan.

Dania Hassan was given her award at an event organised by the US-Pakistan Women Council at the residence of Shaista Mahmood, a founding member of the council. The event was graced by senior officials of the State Department, board members of the US-Pakistan Business Council, and prominent members of the Pakistani community in the US, as well as students. 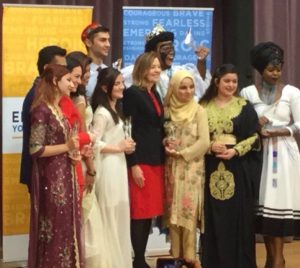 What the award entails

According to information available on the website of the US Department of State, the Emerging Young Leaders Award is granted every year to 10 outstanding young leaders between the ages of 18 and 24 from across the globe. The awardees visit the US for an intensive two-week programme designed to recognise and support their efforts to enact positive societal transformation. Along with receiving their awards in Washington, D.C., the honorees attend meetings with US government officials and non-governmental organisations. They then travel to Austin, Texas to participate in professional meetings and engage with their American counterparts. The young leaders then reconvene in Washington, D.C. to share project plans and examine ways they can collaborate and build on their experiences.

The Emerging Young Leaders exchange programme continues in the awardees’ home communities and they are provided with mentoring and support through a virtual exchange. Upon their return home, they are eligible to apply for individual grants to support their work.

This is not the first time that a Pakistani has earned the distinction of having received this prestigious award. Previously, Raj Kumar Gujar, a graduate of the Shaheed Zulfiqar Ali Bhutto Institute of Science and Technology, was honoured with the Emerging Young Leaders Award in 2017.