A young Pakistani cardiologist, Dr. Jaffar Khan, has been recognised for the invention of a procedure that has helped in the advancement of cardiac surgery techniques. According to media reports, Dr Khan was honoured by the British Cardiovascular Intervention Society when he was declared the winner of its prestigious 2018 Young Investigators Award in January.

The procedure that Dr. Jaffar Khan has invented was recently used to conduct a set of surgeries on humans. The technique is medically described as the “laceration of the anterior mitral valve leaflet to prevent outflow track obstruction”, and is also known by the acronym “LAMPOON”.

While elaborating further on the procedure, Dr Khan explained that the focus of his research was on minimally invasive techniques to resolve cardiovascular problems.

“LAMPOON is a procedure I invented at the Nationa 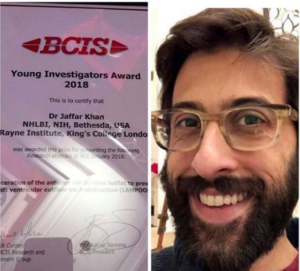 l Institutes of Health in America,” he said. “It is a ‘keyhole’ cardiac surgery technique that resects heart tissue for the first time using minimally invasive techniques.”

Dr Khan has further revealed that he is now the clinical lead for the US-based Food and Drug Administration-approved clinical trial together with Dr Robert Lederman, who is the head of the cardiovascular intervention branch at NIH.

The brilliant young cardiologist’s research included invention of the concept, its testing on animals, and eventual application on humans.

Dr. Jaffar Khan achievement comes on the heels of three students of the Space Science Department of the Institute of Space Technology in Islamabad receiving international acclaim for their research on super-massive black holes and galaxy collisions in space, with their findings being described as “outstanding” by experts in the field.

The achievements of these young Pakistanis in various fields of scientific endeavour augur well for the future of the country, and indicate that if investments our made in the field of research and development, and enough emphasis is focused on the importance of scientific enquiry, Pakistanis have all the potential in the world to come up with world class inventions and discoveries.