A survey conducted by the Overseas Investment Chambers of Commerce and Industry (OCCI) has revealed that 75% of foreign investors possess high confidence in Pakistan’s investment scenario and foresee their businesses registering continuous growth. They also predict an increase in foreign investment in the country. While the survey titled “Perception and Investment Survey 2017” was carried out in November last year, its results were only recently presented by OICCI President Khalid Mansoor to Prime Minister Shahid Khaqan Abbasi. 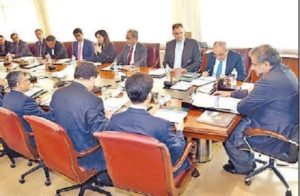 The survey further reveals that the key factors behind the positivity displayed by foreign investors include an improved security situation as well as an increase in electricity supply for businesses.

Mansoor expressed satisfaction at the survey results while noting some of the challenges that foreign investors still face in Pakistan.

“Overall results of the survey reflect improved and positive sentiments of the members of the OICCI,” he said.

According to The Express Tribune, in the last three such surveys conducted, respondents have consistently identified energy shortages as the second biggest challenge they face while doing business in Pakistan. This time, however, this factor has dropped out of the top five challenges identified as having hindered foreign investment in Pakistan.

Similarly, ‘Security, Law and Order’, which has topped the list of challenges faced in the last three surveys, has this time dropped to third place.

Most encouragingly, almost 66% of respondents indicated that they had plans to make new investments in the country, out of which nearly 80% of respondents plan to invest more or similar amounts over the next one to five years. This planned investment in business and human capital will likely also enhance revenue and profitability, as 85% of respondents are expecting an increase in sales, while 68% expect their profits to rise.

In more good news for the investment scenario in the country, around 80% of OICCI members said they will recommend Pakistan to potential foreign investors. Additionally, when comparing the business climate in Pakistan with that of 10 regional countries, more than half the respondents gave a higher rating to Pakistan, as compared to India, Indonesia, Sri Lanka, Bangladesh, Philippines and Vietnam.

Pakistan’s risk perception also seems to be on the mend with 71% of members regarding the country as a ‘Medium Risk’ one, which is an improvement on previous years.

Pakistan has also scored reasonably favourably on certain other aspects as well including ‘access to local finance’, ‘safety of foreign investment’, ‘independent legal system’, and ‘protecting minority interest’. In addition, most respondents were highly optimistic about the recent accords that the government has signed, including those related to the China-Pakistan Economic Corridor.

Pakistan’s membership of the Shanghai Cooperation Organization as well as the country becoming a signatory of the Organization for Economic Cooperation and Development were also viewed highly favourably. The latter development, especially, fostered much positivity as it could lead to the widening of Pakistan’s tax base.

The prime minister assured the OICCI president that the government will take full cognizance of the issues still being faced by foreign investors and will do everything possible to help address these speedily, ensuring that the investment and business scenario in Pakistan continues to thrive.

The highly encouraging results of the survey come on the heels of the announcement that American business magnates and gurus of Fortune 500 companies will soon be visiting the country. All these developments combine to reflect that the liberal and investor-friendly policies that Pakistan has been following in recent years are now clearly beginning to bear fruit.