Pakistan’s quest to attract more foreign investment received a huge boost when a delegation of French investors visited the country after a gap of 12 years. The visit of french investors in Pakistan lasted between April 4-6, saw more than a dozen French businesses showing keen interest in investing in the country and expanding bilateral trading links.

The visit of the France-Pakistan Business Council, consisting of 16 French businesses and headed by Thierry Pflimlin, chairman of the France-Pakistan Business Council of MEDEF and president of Total Global Services, gave French companies an opportunity to understand the Pakistani economy better. Pflimlin stated that the visit has enabled French businesses to explore the opportunities Pakistan could provide, especially in light of the initiation of the China-Pakistan Economic Corridor project.

“Pakistan has a favourable financial position and the security situation has improved tremendously during the last three years,” he said. “We have identified fields of cooperation… agriculture, food processing, hydroelectric and renewable energy, digitisation of the industry, electronics, information technology, LNG storage and re-gasification.”

During its visit, the French investors in Pakistan delegation met officials of the Board of Investment, federal minister Ahsan Iqbal, representatives of the ministries of petroleum, planning, commerce and food, as well as officials of the Pakistan Business Council. The delegation also called on President Mamnoon Hussain.

Economic ties between France and Pakistan have been on an upward trajectory in recent times with France making investments worth $1.4 billion in the country so far in 2017. Earlier in September 2016, a meeting had been held between Finance Minister Ishaq Dar and MEDEF International in Paris, which laid the groundwork for attracting French investors to Pakistan. It should be noted here that MEDEF International is the most representative organisation of the French private sector at the international level.

Philippe Fouet, head of the Economic Department of the French Embassy in Islamabad recently told members of the Faisalabad Chamber of Commerce and Industry that Pakistan and France had the potential to increase their bilateral trade significantly.

“Our imports and exports are far less than the existing potential, but positive indicators are very encouraging,” he said. 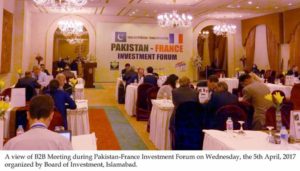 Fouet was also effusive in his praise for the progress shown by Pakistan’s economy in recent years.

“All macroeconomic indicators are positive, but both countries have to take fresh steps to further strengthen bilateral ties,” he said.

Fouet further expanded on the investments France has made in Faisalabad, where the first phase of a water treatment and distribution project has been completed while its second phase is now at the planning stage. The project aims to provide clean water to the water-deficient areas of the city.