Pakistani Nobel Peace Prize winner Malala Yousafzai became only the sixth person, and the youngest, to receive honorary Canadian citizenship. The 19-year-old was bestowed with the honour in a ceremony held in the Canadian capital of Ottawa on April 12.

Following the ceremony Malala also had the unique honour of addressing the Canadian Parliament where Prime Minister Justin Trudeau introduced her in a glowing tribute. He recounted her achievements in the field of education activism and was effusive in his praise for her courage in the face of those who were bent on destroying her.

“Malala, your story is an inspiration to us all,” he said. “For bravely lending your voice to so many, we thank you. From this day forward, we are all proud to call you Canadian.” 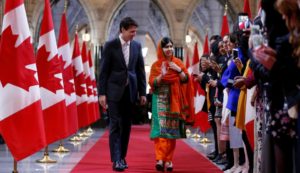 Recounting the 2012 attack on her in Swat by the Taliban, he said, “As the world prayed while she recovered, we were reminded that a bullet is no match for an idea.”

It should be noted that for Malala Yousafzai honorary Canadian citizenship had been announced back in 2014 when the Canadian Conservative party was still in power. However, just before the ceremony to award her with the honour was to be held in October 2014, Canada’s National War Memorial came under a terror attack on Parliament Hill, forcing the ceremony to be postponed.

In her speech to the Canadian Parliament, Malala spoke up against extremism and terrorism. Canadian newspaper The Star reports that she referred to the attack on the National War Memorial and said that while the perpetrator of that incident called himself a Muslim, he did not share her faith.

“I am a Muslim, and I believe that if you pick up a gun in the name of Islam and kill an innocent person, you are not Muslim anymore,” she said.

Malala Yousafzai UN messenger of peace also thanked the Canadian government for the honorary citizenship and praised its role in making the world a better place for the less fortunate.

“I’m humbled to accept honorary citizenship of your country,” she said. “While I will always be a proud Pashtun and a proud citizen of Pakistan, I’m grateful to be an honorary member of your nation of heroes.

“Your motto and your stand ‘welcome to Canada’ is more than a headline or a hashtag. It is the spirit of humanity that every single one of us would yearn for if our family was in crisis. I pray that you continue to open your homes and your hearts to the world’s most defenseless children and families, and I hope your neighbours will follow your example.”

Malala also stated that the solution to some of the most grinding problems the world faces lies in the education of girls. 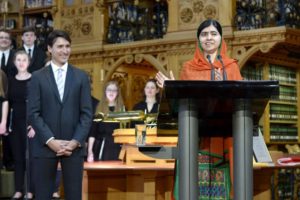 “I can tell you that the answer is girls,” she said. “Secondary education can transform communities, countries and our world. Education is vital to the security of the world, because extremism grows alongside inequality, in places where people feel they have no opportunity, no voice, no hope.”

Urging Canada to do more for global development, Malala said, “The world needs leadership based on serving humanity, not based on how many weapons you have. Canada can take that lead. Use your influence to fill the global education funding gap.”

Malala’s speech was also interspersed with humour generating quite a few laughs from her rapt audience. She described how people back home were excited over the prospect of her meeting with Trudeau.

“They say that he is the second youngest prime minister in Canadian history. He does yoga. He has tattoos,” she said to laughter. 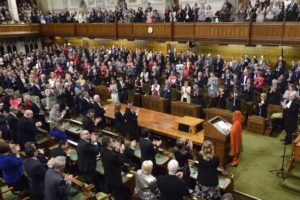 As stated earlier, Malala is the sixth person in history to have been bestowed with an honorary Canadian citizenship. The first was Raoul Wallenberg, a Swedish diplomat who saved thousands of Hungarian Jews during the Second World War.

It should be noted that an honorary citizenship of Canada is entirely symbolic. It does not come with any rights or privileges, such as a Canadian passport or the right to vote in national elections.