The Pakistan Stock Exchange (PSX), which was declared the best-performing stock market in Asia in 2016, has more good news in store for it this year with the highly respected Morgan Stanley Composite Index (MSCI) deciding to give it the much-coveted MSCI emerging market index status.

This was revealed in the MSCI’s May 2017 Semi-Annual Index Review, published on May 15, where Pakistan’s status was upgraded from a frontier market to an emerging market. The status will come into effect on June 1, with Pakistan joining the ranks of countries like Brazil, China, India, Malaysia and Russia.

The MSCI is a leading provider of international investment decision support tools and an upgrade in status by it augurs well for Pakistan as emerging markets are more economically developed than frontier markets and pose less of a risk to investors.

In the past, Pakistan had been part of the MSCI Emerging Markets Index from 1994 to 2007. Following the 2008 stock market crash, the Karachi Stock Exchange was temporarily closed to prevent the flight of foreign investors from the market. Once the market opened again, 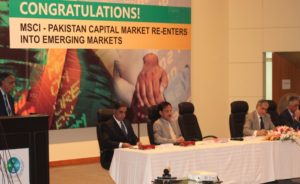 foreign investors pulled out their investments from the country and the MSCI relegated Pakistan’s status from that of an emerging market to a frontier market, causing the country’s equity market to lose access to trillions of dollars.

Pakistan’s return to the MSCI Emerging Markets Index shows the consistently solid performance that the country’s equity market has delivered since those dark days of the 2008 crash. Regulation standards have improved as have market fundamentals, which are set to perform even better following the MSCI’s latest decision.

“The great thing about being added to an index is that pretty soon there will be inflows of money to the country,” Satya Patel, a portfolio manager at Matthews Asia in San Francisco told the Wall Street Journal. “For one thing, when a country is added to an index, funds that aim to track that index need to buy stocks in that country. In this case, they will sell dollars and buy Pakistani rupees in order to buy the local stocks.”

This inflow of foreign currency helps stabilise the economy, maintain the flow of imports, support the home currency on world markets and help draw attention to the investment opportunities within the country.