The World Bank has declared Pakistan to be among the top five countries receiving the highest private participation in infrastructure (PPI) during the first half of 2017. This was revealed in the World Bank’s PPI Database recently, which gave information based on developments occurring during the first six months of the year. Pakistan’s improved status in terms of private investments in infrastructure is largely due to the initiation of some power projects whose worth runs to the tune of billions of dollars. Most notable among these are two hydropower plants costing $3.6 billion.

Besides Pakistan, the other countries making the top-five list include Indonesia, Brazil, China and Jordan. This is the first time Pakistan has entered the list of top five countries receiving the most amount of private participation in infrastructure. The increased enthusiasm for private investment in infrastructure in the country is mirrored by a similar trajectory for South Asia as a whole. Investment in South Asia has already reached the level it attained during the entire year of 2016 and its global share of PPI investment for the first half of 2017 amounted to 17 per cent, which shows a marked increase from the abyss it fell to in 2015 when its share of the global PPI was just four per cent. 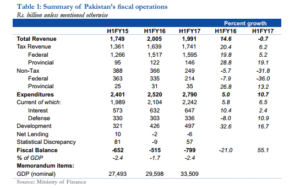 Despite the country’s improved PPI performance, it is important to note that to maintain this trend Pakistan will need to keep developing a steady pipeline of infrastructure projects conducive to receiving private investment, and not just in the energy sector. According to Cledan Mandri-Perrott, who manages the World Bank’s Infrastructure Finance Hub and is a Lead Finance Officer and Public-Private Partnership Specialist at the organisation, there is a “… lack of a consistent pipeline of projects being developed and brought to market” in many emerging markets. In a recent blog that he wrote for the World Bank website Mandri-Perrott said that “this lack of pipeline development continues to be the main challenge facing emerging markets and developing countries as they try to mobilize private sector efficiencies and capital into infrastructure”.

Given that the China-Pakistan Economic Corridor is slated to bring about the development of numerous infrastructure projects, it is to be hoped that Pakistan will be able to maintain its newfound status as a major recipient of private participation in infrastructure.

Coming to the country’s foreign direct investment (FDI) level, there is more good news as it increased 56 per cent year-on-year in the first quarter of 2017-18, according to the State Bank of Pakistan. FDI during the July-September quarter rose to $662 million from $423 million a year ago, an increase of $238.5 million. At the same time, foreign exchange remittances and exports have also performed well in the quarter that has just ended. However, the current account and trade deficits have continued to rise, making it tricky for Pakistan to meet its foreign debt commitments.