Pakistani female power-lifters paid off the trust reposed in them in dramatic fashion, winning 12 of the 15 gold medals that the country’s athletes won at the Oceania Powerlifting Championship 2017 and Pacific Invitational held in Singapore from December 7-10. At the event Pakistan were represented by four female power lifters making it the largest female contingent from the country to take part in an international competition.

The country’s spectacular showing was headlined by debutant Saniha Ghafoor (57kg), 2015 Asian championship gold medalist Twinkle Sohail (72kg), and Sybil Sohail (47kg), who all won four gold medals each in their respective categories. All three athletes made the records in squat, bench-press and dead-lift.

The head coach of the Pakistani contingent Rashed Malik was all praise for the superb performance.

“It was one of my aims to make sure that we show the world that Pakistani women can also thrive in powerlifting events,” he told The Express Tribune. “We’ve got a very good response from the international community; they were surprised and impressed. We made sure that our athletes, and especially the girls, get their professional gear before the event and do not lag behind in any way.”

Meanwhile, Saniha, taking part in her first international competition was oozing with supreme confidence even before the event started. 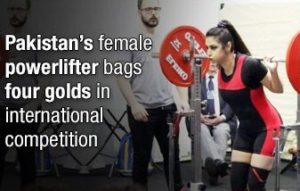 “I had a feeling that I would win this medal even before I came here,” she said. “I was confident that I can have my dream debut. I’m just surprised at how well we’ve been received here. I see great scope for women in powerlifting.”

The more experienced Twinkle expressed her jubilation and highlighted the role of the coach in the squad’s success.

“Women are just as good as men, and we’ve just proved it with powerlifting, haven’t we?” she said. “It is just the dedication of our coach and also the fact that we need to move forward. I certainly felt the pressure as there were more countries competing in this championship. I really wanted to win the gold medal and have that record because we’ve put in so much effort and the exciting part of the event was that we’ve never competed among the Oceania nations before, so they had no clue how good we were.”

Meanwhile, Sybil’s stunning run was even more impressive given that she had to reduce 1.5kg in just 12 hours before the start of the championship to ensure her participation in the 47kg category.

“Weight gain can be tricky right before the event, but I managed,” she said. “It has been a great experience for me but surely powerlifting is a tough sport and it’s more competitive than it is generally perceived. It feels great to be part of a successful team. It was a collective effort at the end of the day and we supported each other through the camp and the competition.”

The ambitious Twinkle now has her sights set on winning a gold medal at the world championships, The Express Tribune reports.

“Hopefully I’d become the first Pakistani woman to win the World Championships someday,” she said. “It is only to show that more women should take up strength sports.”

Meanwhile, The Express Tribune also reports that the Australian Powerlifting Federation, impressed by Saniha’s debut performance, has invited her to train at a three-month programme in Melbourne.

Gold for the men too 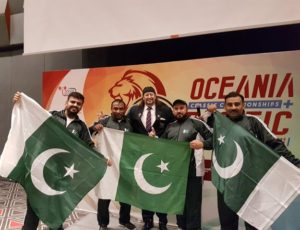 Pakistan weren’t left lagging behind at the men’s event either, with the male athletes lifting three gold medals at the Oceania Powerlifting Championship 2017. The experienced Mahmood Heera won the gold medal in the 120kg category, lifting 609kg, to improve his national record of 590kg in masters-1 category.

In addition, Syed Nadeem Hashmi lifted 530kgs in the 105kg category to take the gold medal, while teenager Muhammad Ahmed Khan contributed with his gold medal in the 120kg sub-junior category.

Oceania Powerlifting Championship 2017 in Singapore featured 148 athletes from countries in the Asia Oceania region, including Australia, New Zealand, Japan and China among others.