Pakistan’s status as a rapidly emerging tourist hotspot was cemented still further when the British Backpackers Society (BBS) ranked the country as the world’s top travel destination for 2018. The Society while announcing the results on its Facebook page late last month described Pakistan as “one of the friendliest countries on earth, with mountain scenery that is beyond anyone’s wildest imagination”.

The BBS had drawn up a list of the world’s top 20 adventure travel destinations for 2018, which besides Pakistan also included countries like Russia, India, Turkey, Kyrgyzstan and China. The Society’s main aim is to encourage people to travel to places in the developing world that aren’t traditionally considered to be important tourist destinations but have the potential to become major hotspots for travellers.

In a statement on the Society’s Facebook page, the backpackers stated: “Pakistan is the clear winner of the British Backpacker Society’s top 20 adventure travel destinations 2018 and we encourage keen travelers to book a trip now.”

Samuel Joynson, 26, and Adam Sloper, 25, who are members of the BBS and have travelled to 101 countries besides Pakistan, while talking to Gulf News said that they were bowled over by the hospitality displayed by Pakistanis as well as the spectacular natural beauty of  the country.

“Pakistan is one of the friendliest countries on earth,” said Joynson. “So, prepare to be invited into people’s homes, take more selfies than you can count, and have every preconception that you ever held about this area of the world changed forever.” 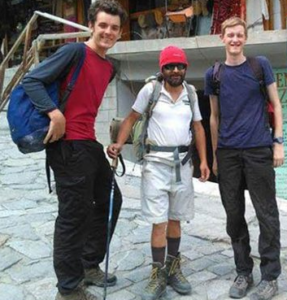 The two Englishmen travelled to Pakistan in 2016, visiting Lahore, Rawalpindi and Islamabad, before going on to Kaghan valley, Naran, Babusar Top and Gilgit. They completed their journey in Hunza Valley, where they climbed to the top of the Hon Pass (4,257m) from Karimabad.

“We chose to climb the Hon Pass as Eric Shipton, one of Britain’s most famous mountaineers, described the view from the pass as ‘the ultimate manifestation of mountain grandeur’, and we wanted to follow in his footsteps and experience this spectacle,” explained Joynson. “The view from the Hon Pass was indeed the greatest natural sight that either of us has ever seen, and we would recommend it to anyone with a keen interest in mountaineering.”

While advising potential tourists to Pakistan, Joynson says: “Head north to the astonishing peaks of the Karakoram along the unforgettable Karakoram Highway. It is beautiful, exciting and culturally interesting, and travellers are rewarded at the journey’s end-point with perhaps the most beautiful natural sight on earth, the Hunza Valley.”

The duo also suggested that tourists should take the Karakoram Highway as the road from Islamabad to the China border on the Khunjerab Pass offers “the world’s greatest road-trip”.

Over the last 15 years or so, Pakistan has been wracked by security concerns and has been regularly hit by terror attacks, which has proved to be disastrous for the local tourist industry. The state of law and order, however, has improved manifolds in the last two years, resulting in annual tourist arrivals to Pakistan more than tripling since 2013 to 1.75 million in 2016, while domestic travelers rose 30 per cent to 38.3 million, according to the state-owned Pakistan Tourism Development Corporation. While talking about this aspect of travelling to Pakistan, Sloper advises travelers “to put preconceptions on the security situation in Pakistan to one side, and conduct some independent research”. He goes on to say that one “should certainly review travel advisories from respective governments, but also speak to local Pakistanis about the situation. We believe that travel is at its best when it changes a visitor’s preconceptions, and few experiences achieve this more than travelling in Pakistan.”

The British backpackers society also recommended travelling to Hunza Valley, Kaghan Valley and climbing the Rakaposhi (7,788m) and Nanga Parbat (8,126m) peaks as “the mountain scenery was unimaginably beautiful, and we will remember it forever”.