While Pakistan may not be participating in the upcoming 2018 FIFA World Cup in Russia, the country will nevertheless be making its presence felt at the mega event, as a Sialkot-based sports goods manufacturing firm Forward Sports will be manufacturing the official football of the sporting extravaganza, called the Telstar 18.

This was announced by the Ministry of Commerce last week. The same firm has also had the distinction of having manufactured the official football for the 2014 FIFA World Cup as well, popularly known as the Brazuca. 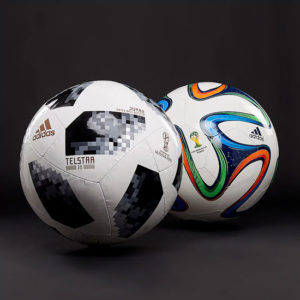 According to media reports, the commerce ministry secretary, speaking at a ceremony, emphasised the importance of this development for the country’s business sector.

“Just like brand image holds great significance for businesses, the country also holds great importance in the field of trade and commerce,” he said. “Our aim is to promote a positive and progressive image of Pakistan.”

State-of-the-art technology has been used in the footballs being manufactured for the 2018 FIFA World Cup. These footballs are going to be equipped with sensor chips with Near Field Communication (NFC) technology that will be synced with smartphones. The chips require enabling of the NFC on the users’ phones, which will in turn allow them to interact with the balls using their smartphones. When a user interacts with the ball, each ball generates an identifier and unlocks exclusive information for the user. The personalised experience provides details of each ball in a display.

In addition, the ball is thermally bonded and heat is used to patch its pieces together instead of employing the traditional method of stitching footballs. The seamless surface of the Telstar 18 is designed to ensure efficient ball control and minimisation of water absorption.

In the past also Pakistani sports goods manufacturers have been in the forefront of introducing cutting edge technology when it comes to producing footballs. In February this year, Pakistan produced the first of its kind, mini airless footballs. These machine-made footballs were manufatured by making use of advanced manufacturing technology.

According to Daily Times, Pakistan exports a massive 40 million footballs a year with revenue from the export of this item yielding $122 million between the period July 2017 and April 2018. The world’s biggest football leagues, including the English Premier League, LaLiga, Ligue 1 and the UEFA Champions League all use footballs that have been manufactured in Sialkot.

Back in January, Russia’s Ambassador to Pakistan Alexey Dedov, while speaking to Express News, had spoken highly of the country’s expertise in manufacturing sports goods.

“Pakistan is one of the most renowned countries in the world in the manufacture of sport equipment,” he said. “We want to enhance our cooperation with Pakistan to other sectors as well.”