Pakistani tech entrepreneur Syed Faizan Hussain has been awarded with the Queen’s Young Leaders Award 2017 for his work in harnessing technology to come up with solutions for problems facing the country’s health sector.

The 23-year-old was given the award at a ceremony held at Buckingham Palace on June 30, where he was recognized for his achievements along with 59 other high achievers from the Commonwealth countries. Hussain was the only Pakistani to have received the award.

The young entrepreneur has founded several start-ups, including Edu-Aid, an app that translates sign language into spoken language in a bid to overcome communication barriers between hearing and speech-impaired persons and others. His other major venture is OneHealth, a disease surveillance and tracking system that notifies health institutions about epidemic outbreaks. Syed Faizan Hussain also volunteers at the Saylani Welfare Trust where he has taught computer programming to more than 200 students from und 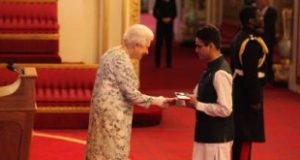 ProPakistani reports that Syed Faizan Hussain is determined to build on this success in the future.

“I am delighted to have received this award and look forward to expanding my leadership skills and engaging with people from various fields who will be sharing their ideas and experiences,” said the Queen’s Young Leaders Award winner.

Hussain, a graduate of Bahria University, Karachi, is now working on developing a technology consultant and outsourcing company called Venture Dart for small businesses and entrepreneurs.

About the Queen’s Young Leader award

The Queen’s Young Leaders Award, first launched in 2014, recognizes exceptional young people between the ages of 18 and 29 from across the Commonwealth, who are using their skills to improve the lot of those who are part of their communities.

Winners of this year’s award got to avail a combination of training, mentoring and networking opportunities, which included a week-long residential programme in the UK. During their stay in the UK, the winners spent three days at the University of Cambridge’s Institute of Continuing Education. They then traveled to London where they toured offices of such global organisations like the BBC World Service and the Facebook headquarters in the UK. 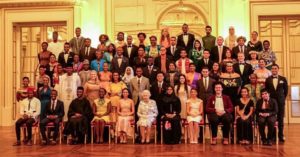 The award winners were also hosted by the Commonwealth Secretary General, and had the opportunity to visit 10 Downing Street. The residential programme finally culminated with a visit to Buckingham Palace where the winners received their awards from the Queen.

At the start of the residential programme, Chief Executive of The Queen Elizabeth Diamond Jubilee Trust, Dr Astrid Bonfield CBE, stated: “The Queen’s Young Leaders of 2017 are doing truly remarkable work within their communities. Their actions are having a positive impact not only on those around them but also by setting in motion positive change that will last for generations to come.

“The residential programme is an opportunity for the 2017 Queen’s Young Leaders to come together for the first time, to foster partnerships and share ideas about how they can work together as a group to improve people’s lives all over the Commonwealth.

We are delighted that these young people are being recognized for their life-changing work by Her Majesty The Queen and we hope that their time in the UK will inspire and enable them to pursue their work for others on an ever greater scale.”