Pakistani student Maaha Ayub clinched the bronze medal at the 49th International Chemistry Olympiad (IChO), which featured contestants from more than 75 countries, including the US, China, Russia and India. The prestigious chemistry competition was held between July 6-15 in Nakhon Pathom, Thailand.

The contest, organised annually, features the world’s most talented chemistry students at the secondary school level, who are tested on their chemistry knowledge and skills in a five-hour laboratory practical and a five-hour written theoretical examination.

As reported by Dawn, Maaha Ayub, an A-levels student from Lyceum School Karachi, was clearly delighted at bringing laurels to the country.

“It was no less an honour to represent Pakistan on an international level,” said the 19-year-old. “The feeling of holding the country flag in front of some of the biggest nations of the world was indescribable.”

The IChO featured a team of four from Pakistan, which competed against 297 students from around the world. Maaha Ayub told the The Express Tribune that she had been selected to represent Pakistan at the competition by the Higher Education Commission and the HEJ Institute of Chemistry after passing a screening test conducted by them.

Hundreds of students had sat for the test, which was held nationwide under the Science, Technology, Engineering and Mathematics Careers Programme. The top 50 students emerging from the test were selected for further training and grooming in a three-week camp. After the completion of the camp, students were again shortlisted to form the team that was sent to the IChO. 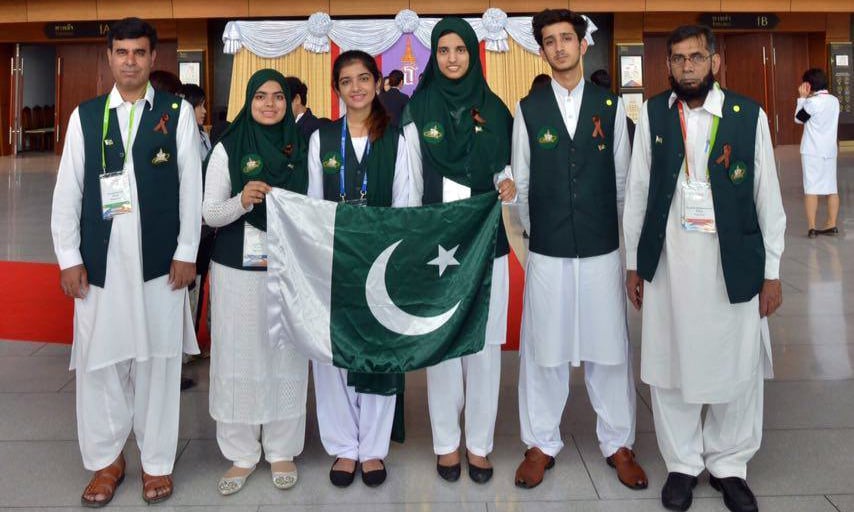 Ayub revealed that the 10-hour-long contest at the Olympiad had proved to be a tough test of her knowledge, skills and stamina, but at the same time the entire experience turned out to be a rewarding one.

“The competition was more than just exams. We got the opportunity to interact with many students from around the world,” she said. “This [exposure] helped to present a positive image of Pakistan in front of a global audience. The youth of Pakistan was no less in potential than the rest.”

The Olympiad, first held in 1968 in Prague, takes place in the beginning of July every year in one of the participating countries. The IChO’s website states that its ultimate goal is to “stimulate student interest in chemistry through independent and creative solving of chemical problems. It also aims to promote international contacts in chemistry, friendships between young scientific workers of different nationalities, cooperation among pupils, and exchange of pedagogical and scientific experience in chemistry.”