Pakistani weightlifters are holding the national flag high at the Commonwealth Games 2018 currently going on in Gold Coast, Australia, winning two bronze medals and ensuring the country makes its presence felt on the medals’ table. April 9 saw Nooh Dastagir Butt smash a record at the Games by registering the highest-ever weight by a junior in the +105kg category.

According to The Express Tribune, Nooh, who missed out on a silver-medal finish by a difference of just five kilograms, lifted a total of 395kg to make a new junior record. In the process he went past India’s Gurdeep Singh, but failed to overcome the challenge put up by New Zealand’s David Liti (403kg) and Lauititi Lui (400kg), who finished in the top two spots. The record-breaking performance that handed Nooh the bronze medal ensured that he went past his own record of lifting 389kg, which he had achieved at the Commonwealth Weightlifting Championship last year. 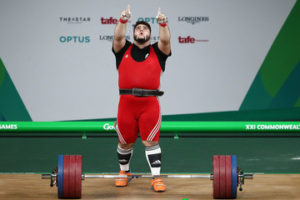 While acknowledging Nooh’s superb show, Pakistan Weightlifting Federation (PWF) Vice-President Rashed Malik at the same time felt that the gifted weightlifter from Gujranwala had all the talent in the world to win gold.

“If Nooh had managed to get five of his six attempts successful, he could’ve got us the gold,” Malik told The Express Tribune. “The pressure of the competition got to him but despite the missing he lifted enough weights to get the medal. This shows his calibre; we just need to work harder. Nooh is 20 and this is also his last year as a junior, we are glad he made the record.”

Given the 20-year-old’s vastly improved show at international events over the past two years, the PWF is now pinning its hopes on Nooh to qualify for the 2020 Olympics to be held in Tokyo.

Nooh’s achievement wasn’t the only instance of a Pakistani weightlifters proving his mettle at the Commonwealth Games 2018. Earlier on April 5, 18-year-old Talha Talib also won a bronze medal for the country when he broke a Commonwealth record, lifting 132kg in the snatch event of the 62kg category.

Talib, who is a national champion in the 62kg category, lifted a total weight of 283kg and made the record when he lifted 132kg in his third attempt, having previously lifted 127kg and 130kg in the first two attempts respectively. He, however, lost the chance to win the gold after he lifted 151kg in the second clean and jerk attempt, and failed to lift more in the third, which cost him a first-place finish. Malaysia’s Anzil Bidin, who lifted 288kg for gold and Papua New Guinea’s Morea Baru who lifted 286kg for silver were the other medal-winners in the category. 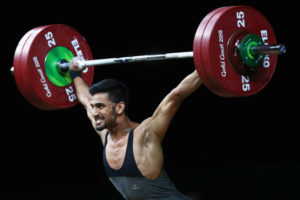 Talha, who like Nooh is also from Gujranwala, has made his country proud in the past as well when he won a gold medal at the Commonwealth Weightlifting Championships last year.

The PWF had invested a lot of time, resources and effort in training the Pakistani weightlifters over the past year or so, with the aim of winning medals at the Commonwealth Games 2018. A total of five weightlifters from Pakistan competed in as many categories at the event, and with two of them finishing on the podium, it is clear that the hard work put in by both the PWF and the weightlifters has paid off. This augurs well for the future of weightlifting as a sport in the country.

What perhaps Pakistan’s weightlifters might still lack is enough exposure at the international level, an absence of which might explain why the pressure of competing at a mega event might have got to Talha and Nooh at the last minute, due to which they had to settle for bronze medals. However, given the paucity of resources and infrastructure for a non-traditional sport like weightlifting in Pakistan, even bronze-medal finishes by the two youngsters at the Commonwealth Games 2018 are highly admirable and praiseworthy achievements, and must be appreciated.

Of late, Pakistan’s performance in non-traditional sports has seen an appreciable spike, with the country’s athletes winning the bronze medal at the World Junior Ju-Jitsu Championships in March, while Pakistani weightlifters also showed their worth winning 15 gold medals at the Oceania Power-lifting Championship 2017 in December. The two bronze medals won at the Commonwealth Games 2018 is just the latest addition to this list, which hopefully will be followed by more achievements by Pakistani athletes at the international level.