Following the approval of the Automotive Development Policy back in March 2016, which aimed at liberalising Pakistani automotive sector and gave foreign carmakers considerable incentives to enter the country, it is now clear that the measure by the government has begun to bear fruit.

French carmaker Renault has announced that it will start assembling cars in a new plant in Pakistan as early as 2018, with car sales planned to start in 2019, which will be ramped up in 2020. Renault in Pakistan had earlier tried to enter the market through collaboration with Gandhara Nissan Ltd, but that agreement fell through. However, given the attractiveness of investing in the Pakistani automobile sector, Renault did not give up on its efforts to enter the country and has now signed definitive agreements with Al-Futtaim, a Dubai-based firm, for “exclusive assembly at a new state-of-the-art plant in Karachi and distribution of Renault vehicles in Pakistan”.

Renault’s determination to enter Pakistani automotive sector shines a spotlight on its goal to become a major player in the country’s automotive sector through the introduction of its latest products and technology.

“We aim to bring our latest products and cutting-edge technology and set new benchmarks of safety and quality in the market,” said Fabrice Cambolive, the company’s senior vice president and chairman of the Africa, Middle-East and India region. 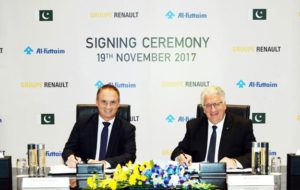 Len Hunt, president of Al-Futtaim Automotive, stated: “With a population of over 200 million, a fast-growing economy and a vibrant middle class, Pakistan is undoubtedly a very important strategic growth market for us. Groupe Renault is among the top automotive brands worldwide and a leading European car manufacturer is entering this market. We will endeavour to add real value to the Pakistani auto sector and consumer, and to create a world-class organisation in Pakistan. Al-Futtaim also looks forward to a very long and successful partnership with Groupe Renault.”

Renault in Pakistan is not the only foreign player keen to take advantage of the country’s liberal auto policy. Two renowned Korean carmakers with considerable global footprint, namely Kia and Hyundai, have already gone into partnership with Younus Group and Nishat Group to set up their plants for starting local assembly of their cars by 2020.

In addition, Volkswagen is also interested in investing in Pakistan, and Chinese brands are also spreading their wings to enter the country to provide pocket-friendly alternatives to those who until now have only been able to afford two-wheelers.

So far, as many as nine Pakistani companies have sought permission to set up manufacturing plants in the country in partnership with foreign carmakers although not all of them have been granted authorisation yet although it is hoped that all applicants will be given the requisite approvals in due course. 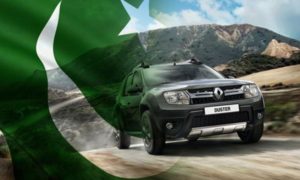 Why foreign carmakers are keen to enter Pakistan

As reported by The Express Tribune, the government is expecting an investment of at least $2 billion dollars in the automotive sector in the next few years. This makes it important to look into the reasons behind this increased activity and why Pakistan is becoming a highly attractive destination for global carmakers.

The country’s huge population of around 207 million people, rising income levels, especially among the burgeoning middle class, the growth in demand for cars and commercial vehicles at an annual rate of more than 10 per cent, the low customer satisfaction provided by the current players in the industry and the poor state of public transport have all combined together to make Pakistan a highly attractive proposition for foreign carmakers, so much so that it is now being considered as one of the most dynamic automotive markets in Asia.

Dawn reports that industry experts believe that by 2020 the market size for cars will balloon to more than 500,000 units annually from the current level of less than 300,000 units per year.

In addition, the huge investment coming into the country in the form of the China-Pakistan Economic Corridor also has the potential to be a major catalyst to further the growth of the automotive sector.

This has all been enabled by the Automotive Development Policy 2016, which provided tax and other fiscal incentives in a bid to make the Pakistani auto sector more competitive and open it up to the world. Until now, the local auto sector has been the preserve of three carmakers, which faced with little competition, have not done enough to offer variety and quality to Pakistani consumers at affordable prices. With the advent of competition in the auto sector, however, the existing players are also now trying to up their game, introducing new car models with better technology, quality and safety features at relatively more competitive price points. They will be forced to think out of the box to counter the new challenges they will be facing in the next three years or so, which all augurs well for the Pakistani consumer.

However, in order to sustain their presence in the Pakistani market, new entrants will have to look out for certain challenges and be ready to face them.

Certain important decisions they will be taking have the potential to either make or break their efforts to establish a successful presence in Pakistan. They will have to decide which market segment to target that can bring them the most profitability, the capacity of the plants they will be setting up and the kind of cars they will be introducing in the country given the state of road infrastructure and technology here. Any wrong decision on any of these fronts may jeopardise their chances of success in Pakistan.

However, none of these challenges are such that cannot be overcome. The opportunity that Pakistan provides is sufficiently lucrative to entice foreign carmakers to enter and successfully sustain their market in the country.