Pakistani cyclist and athlete Samar Khan created history in December 2017 when she became the first woman from the country to scale Africa’s highest peak,

The 27-year-old from Dir, Khyber-Pakhtunkhwa is clearly on a quest to break stereotypes and records as this is not the first time her instinct for adventure has led to history being made. In 2016, she became the first woman in the world to have cycled on the 4,500-metre Biafo Glacier in the Karakoram Range in Gilgit-Baltistan.

Talking to The Express Tribune, Samar shared the reason behind scaling Mount Kilimanjaro on her bicycle.

“I wanted to take the green flag at a global level to show the world what Pakistanis are capable of,” she said. “And to show them that not just our boys but our girls are also risk-takers.” 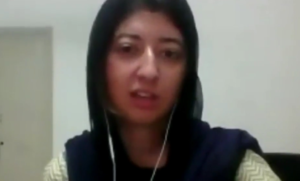 Samar felt that Uhuro Peak of Mount Kilimajaro was an obvious choice to test her talents given the challenges it posed.

“As Mount Kilimanjaro is the highest peak (5,895 metres) and a dormant volcano so it seemed the best target for me to ride my bicycle on,” she said. “I also thought that by doing so I could bring honour for my country and people. With this aim I went on to achieve what no other girl in Pakistan has.”

Samar Khan also acknowledged the role of Pakistan Army and the Hashoo Foundation in making her trip to Tanzania possible.

“This was made possible with the help of my supporters not only in Pakistan but also in Africa,” she said. “I’m also thankful to Pakistan Army for trusting my abilities and sponsoring the event. And as the goodwill ambassador of Hashoo Foundation I also received a lot of guidance and encouragement from them.”

Talking about the four-day trip on Mount Kilimanjaro, Samar recounted the challenges she faced.

“I started cycling towards the summit point and at some places I had to trek as well as lift my bike,” she said. “It was not easy but I pushed myself to the limits.”

Samar’s instincts for adventure, however, have clearly not been sated as she has even greater ambitions for herself. She also hoped that others in Pakistan would follow her example and venture more into adventure sports.

“I wanted to ride my cycle on KIBO crater — one of three volcanoes on Uhuru — and that’s why I want to share my work with my compatriots,” she said. “With my inspiration perhaps more female athletes will venture into extreme sports.”

Samar Khan also has the distinction of summiting a 6,240-metre high virgin peak in May 2017 in Arandu near Skardu in Gilgit-Baltistan, where she rode her bicycle on the summit. As she was the first person to scale this peak, she named it Samar Peak.

A Master’s degree holder in physics, Samar also has strong interest in other adventure sports like paragliding and trekking. She is also a trained Mixed Martial Arts fighter, blogger and motivational speaker.

In an earlier interview to Dawn given in April 2017, Samar Khan revealed why she became interested in cycling and adventure sports, and talked about her journey as an athlete.

“Growing up in Rawalpindi, I never had many chances of playing sports beyond my teenage years. But in my final year of university I went through a difficult emotional experience … In those days I came across a paragliding course. The course made me interested in adventure sports and I also made friends who were interested in adventure sports. Together, we decided to cycle from Islamabad to Abbottabad.

“Later some friends from Hunza and Gilgit suggested that I cycle in the northern areas where people are more open-minded and used to seeing women tourists. So, for my next trip I decided to cycle from Islamabad to Khunjerab with my friend Gule Afshan Tariq.

“Cycling along the Karakoram Highway over 10 days helped me overcome my fear of road cycling and once I had conquered my fears I was ready for a new challenge. After many months of research, I decided to cycle on the Biafo Glacier because I wanted to draw attention to Pakistan’s glaciers, which are threatened by climate change.”

Samar’s achievements throw a spotlight on the resilience, talent and skills of Pakistan’s female athletes, who are now increasingly breaking stereotypes and making their country proud. December 2017 has proved to be an especially eventful month for Pakistan’s sportswomen as it also witnessed our female powerlifters putting up a spectacular display at the Oceania Powerlifting Championship, winning 12 of 15 medals the country won at the event.

Here is to hoping that our female athletes continue to reach even greater heights and are inspired by Samar’s feats.