Investors say the rally in Pakistan has further to run.

Pakistan has plowed an independent trajectory this year, outperforming both its fellow frontier markets and members of the emerging-market grouping that it is slated to join in 2017.

The country’s benchmark KSE100 Index has rallied 27 percent year-to-date to become Asia’s best-performing equity market in 2016, according to a basket of 26 peers tracked by Bloomberg. The market received a boost in June when MSCI Inc. announced that it would reclassify Pakistan as part of its benchmark emerging-market index from May 2017 — a show of confidence that it declined to extend to China. 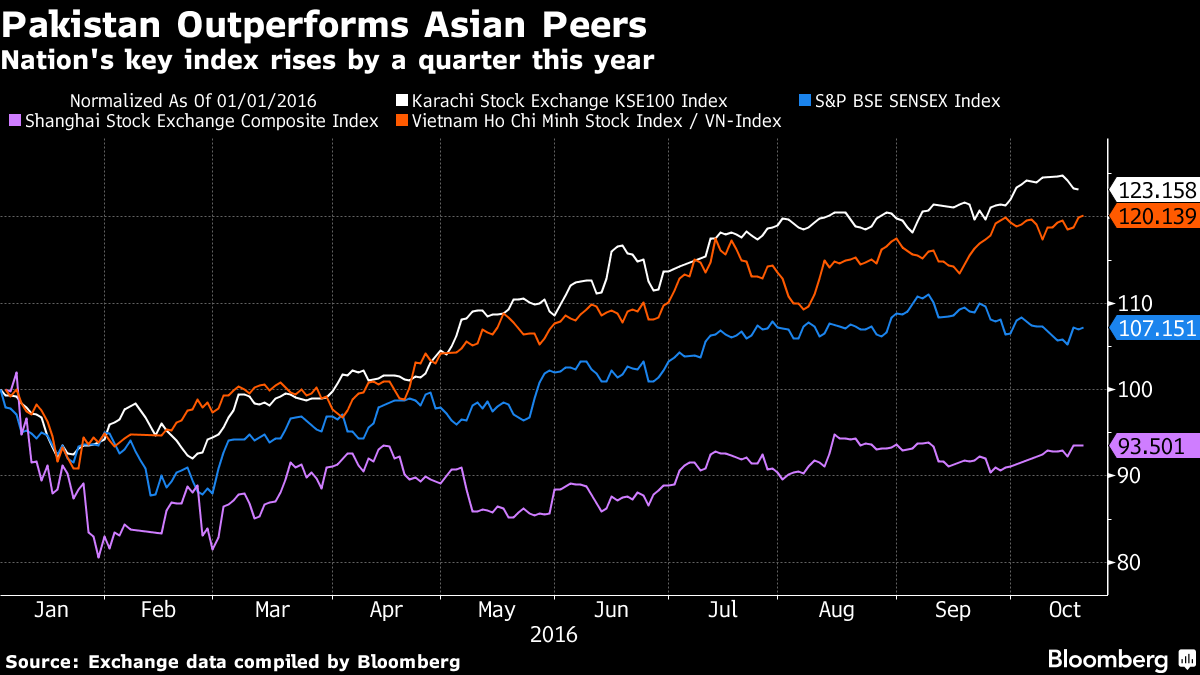 It was a long time coming for South Asia’s second-largest economy. The Pakistan Stock Exchange, previously known as the Karachi Stock Exchange, was downgraded to frontier-market status in 2009 after it introduced curbs against sell orders to stem an investor exodus in late 2008.

After registering gains over seven of the eight years since, investors are betting it still has further to climb.

“The benchmark index can easily reach 60,000 before the general election in 2018,” said Vasseh Ahmed, who’s chief investment officer of Karachi-based Faysal Asset Management Ltd., in an interview. That represents almost a 50-percent increase from present levels. “Now that the IMF program is over, the government will be giving incentives that will positively impact the market and business sentiment. The boost from the upgrade and Chinese investment is also there.”. 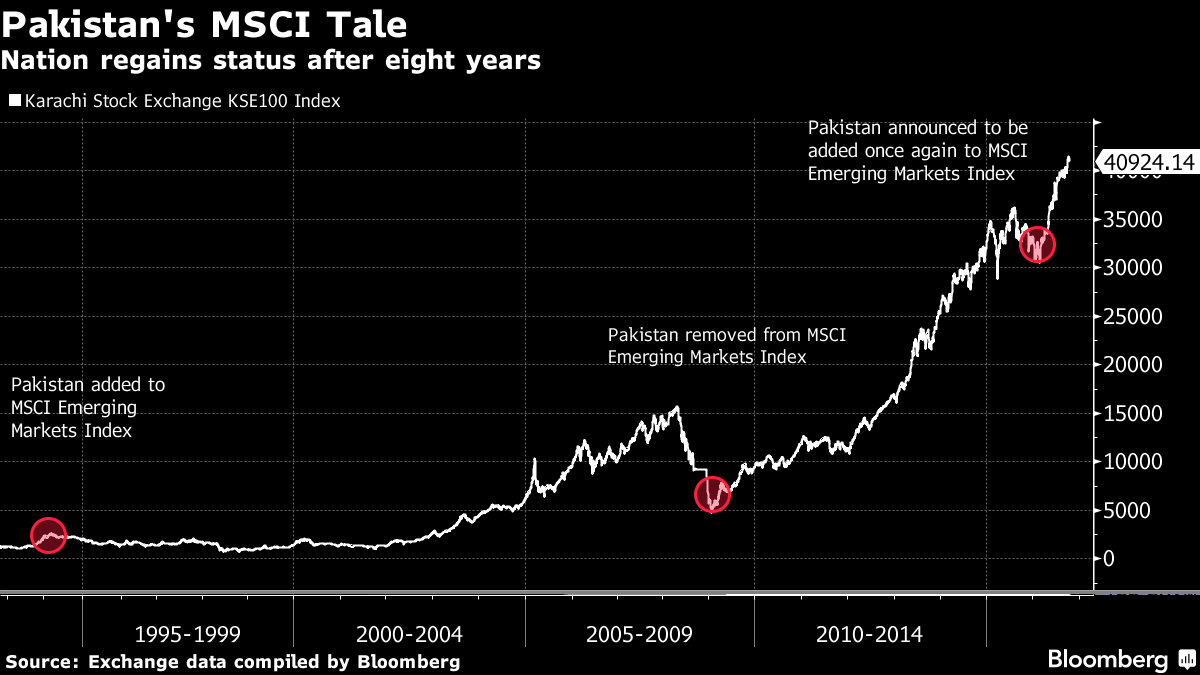 The KSE100 Index reached its all-time peak of 41,464.31 last Friday, and by 2:23 p.m. in Karachi was heading toward a new record. Last month Pakistan completed a three-year $6.6 billion International Monetary Fund loan program. Thanks to the aid, Prime Minister Nawaz Sharif was able to avert a balance-of-payments crisis and boost foreign-exchange reserves to a new high.

“Textile is already seeing the push, and the government may further boost the agriculture sector. The banking sector will also rebound given interest rates have bottomed, while the oil and gas sectors are rallying following a recovery in energy prices and infrastructure development,” added Ahmed. The country’s central bank has held its benchmark interest rate at 5.75 percent since cutting by 25 basis points in May.

For Federico Parenti, Milan-based fund manager of Base Sicav Emerging and Frontier Markets Equity Fund, Pakistan is on top of his wish-list.

“My fund is currently waiting to get access to such a beautiful and nice market,” Parenti said by e-mail. “At the moment Pakistan access is delayed due to fear of political and religious risks, but I think staying just in Europe for investment and thinking other places won’t change for the better is a bigger risk.” 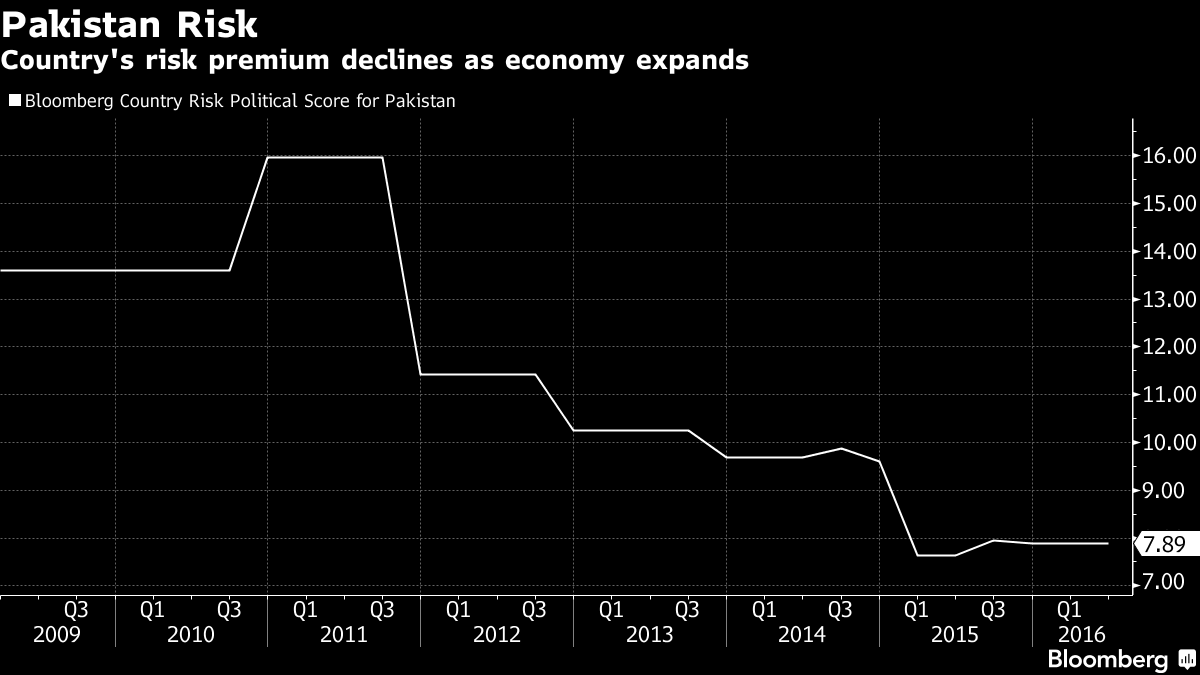 Some offshore investors suggest the country’s leaders must implement structural reforms before the outlook will materially brighten. According to Hasnain Malik, head of frontier-markets strategy at London-based Exotix Partners, the country’s attractiveness depends on whether it can overcome vested interests to restructure its loss-making state-owned entities, and widen its tax base.

“Without such reforms, Pakistan will remain a hostage to external factors, such as global risk appetite, oil prices, index changes as well as foreign aid and investment flows,” said Malik.

For Parenti, the improvements that are predicted by EFG Hermes to lure around $475 million of inflows by the middle of next year do, in themselves, carry risks.

“Because of the MSCI upgrade, the ratio of foreigners holding onto Pakistani stocks is set to increase,” the fund manager said. “But they will also add volatility since most of the money is ‘disloyal,’ meaning that they can easily pull their money out of the country whenever they want.”

Still, he said he plans to allocate 10 percent of his funds to Pakistan once regulators give the go-ahead, with these challenges failing to overwhelm to the country’s enticing demographics. “The prospect is bright with the growing young population and the rising middle class. I want a piece of your economy — a piece of your frozen food, a piece of your cement, and a piece of your hospitals,” he wrote.